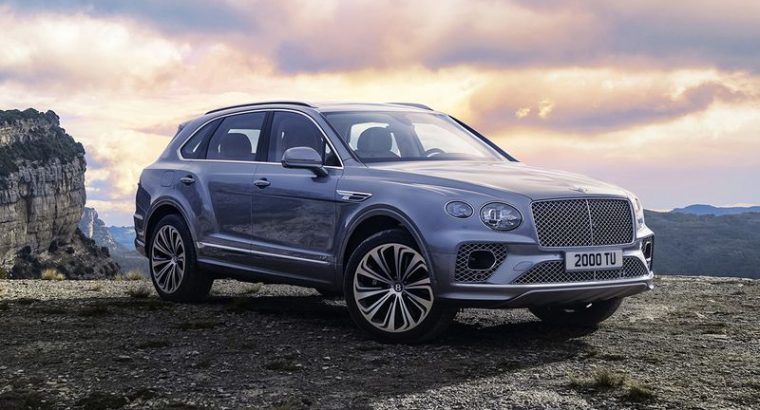 New Bentayga has a full suite of driver assistance systems and the very latest headlamp technology. This includes three automatic modes for low beam and a matrix system, which allows the customer to drive continuously on high beam without blinding other road users.

Each matrix headlamp contains 82 powerful LEDs to improve functionality and road safety. They ingeniously allow the pool of light to be continuously shaped by automatically switching off certain LEDs to ‘box out’ other road users.The three adaptive headlamp settings include Town mode, Country mode and Motorway mode which vary intensity of the light to improve visibility.

The luxurious interior can be enhanced with the application of dark tint diamond brushed aluminium trim for the first time in a Bentley, as well as two straight-grained veneers new to Bentayga: Koa and Crown Cut Walnut. Mulliner Driving Specification adds a new quilting design, and micro piping detailing is a new option for the seats.

The traditional instrument dials have been replaced with a digital display, like in newer Bentleys, and the head-up display shows much more data. The audio system has been upgraded, too. As standard, there is a 790W, 12-speaker stereo, with an optional Naim for Bentley system taking that to 1780W and 20 speakers.

A new 22-inch wheel design is available in two finishes, expanding the number of available wheel designs to five – all of which are unique to Bentley.

Two new colours are also added to the already extensive Bentayga palette – Viridian, a dark shade of metallic green based on the colour of the EXP 10 Speed 6 concept car, and Patina – a luxury-focused mid-tone off-white.

Adrian Hallmark, Chairman and Chief Executive of Bentley Motors, comments: “With the new Bentayga, we’re repositioning the pinnacle of the luxury SUV segment to be even higher, even further away from the competition. We’ve listened to our customers and made improvements to the areas most important to them, and the new Bentayga is a thoroughly modern and beautiful extension of the original car’s abilities and achievements.”

It should come as no surprise that the Bentayga Hybrid pulls in the best fuel-economy ratings of the range. It also offers up to 29km of electric-only driving before the turbocharged V-6 fires up.The performance-focused Speed model, is the pinnacle of the Bentayga range and will be powered by Bentley’s renowned 6.0-litre W12 TSI engine.

The new bentayga is expected to arrive in India sometime around the third quarter of 2021.